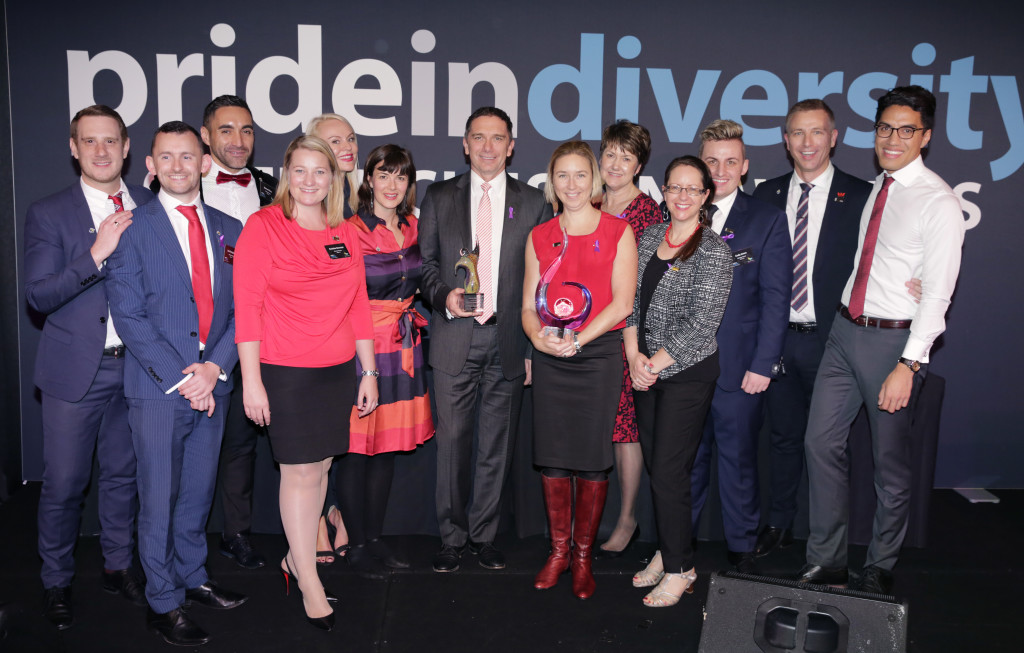 Westpac Group has been named Australia’s 2016 Employer of the Year for LGBTI inclusion for the first time at a special event held in Sydney by ACON’s Pride in Diversity (PID) program, a national not-for-profit employer program for the inclusion of LGBTI people in the workplace.

Employer of the Year heads an annual list of Top 20 employers for LGBTI inclusion determined by assessment against PID’s Australian Workplace Equality Index (AWEI), a benchmarking instrument that evaluates LGBTI inclusivity against a comprehensive set of measures in addition to a body of supporting evidence submitted by the employer as part of the evaluation process.

Along with some truly significant achievements in 2016 by a range of organisations ranging from banking and finance, renewables, telcos and IT, the Australian Federal Police receives the honour of being the highest performing public sector organisation.

Uniting is the highest ranking not-for-profit/charity and the NSW Police, in only their first year in the index, has achieved an 11th placed-ranking as well as receiving an award for transgender inclusion.

Presenting at the Awards Ceremony held on May 20, Patron of Pride in Diversity the Hon Michael Kirby AC said: “Once again we come together to acknowledge the progress being made in Australia in inclusion and non-discrimination in work, sport and life,”

“At occasions like this, it is easy to fall into the trap of believing that ignorant and unscientific prejudice against LGBTI citizens has been overcome in our country…Unfortunately, this is not so,”

“Full equality has not been achieved in 2016. In fact there have been some notable reverses in the past year which we need to look squarely in the eyes; a clear sign that the struggle for dignity in Australia is far from over.”

Director of ACON’s Pride Inclusion Programs (which incorporates PID and the newly launched Pride in Sport) Dawn Hough said: “The AWEI has seen remarkable growth over the first six years of its life with this year seeing the most significant growth to date”.

There has been a 46.6% increase in AWEI participation, 125% increase in first time submissions and a 48% increase in accompanying employee survey responses (n 13,393).

Another noteworthy achievement for this year’s AWEI includes substantial growth in sector participation, including a 50% increase in private, 40% in public and 80% for Higher Education.

“While there is still a long way to go, Hough said that LGBTI inclusion has well and truly made its way onto the Australian Workplace Diversity & Inclusion Agenda.”

Over 600 people attended the sold-out event at Doltone House in Sydney on May 20, emceed by Olympic Diver Matthew Mitcham. Speakers included PID patron the Hon. Michael Kirby and Paul Zahra, PwC Diversity and Inclusion Advisory Board Member and former CEO of David Jones.
“Pride in Diversity congratulates all award winners recognised today on their significant achievement and for showing great leadership in the area of diversity and inclusion.” Ms Hough added.