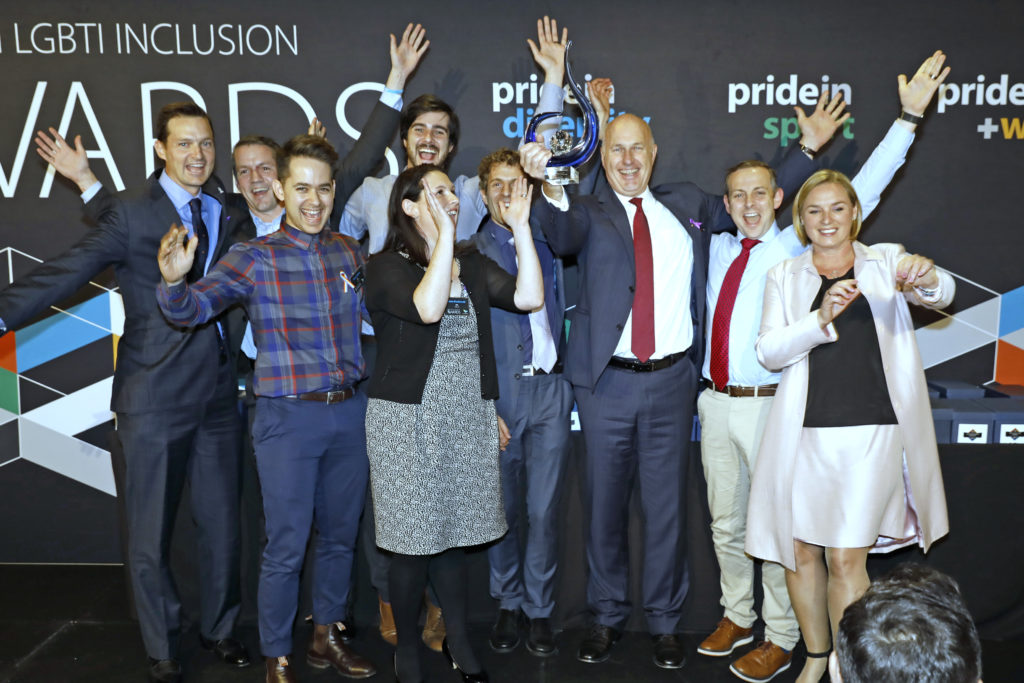 ANZ has been named Australia’s 2017 Employer of the Year for the first time at the sell-out Australian LGBTI Inclusion Awards, a special event held today in Sydney by ACON’s national not-for-profit program, Pride in Diversity.

The Employer of the Year heads an annual list of top employers for LGBTI inclusion determined by an assessment against the Australian Workplace Equality Index (AWEI), a benchmarking instrument that evaluates LGBTI inclusivity against a rigorous and comprehensive set of measures, in addition to a body of supporting evidence submitted by the employer as part of the evaluation process.

Over 640 business leaders, diversity and HR professionals, and representatives from LGBTI employee groups attended the Pride in Diversity luncheon and awards ceremony at Doltone House, which this year incorporated the results of the inaugural Pride in Sport Index (PSI) and featured keynote speakers former High Court justice Michael Kirby and cricketer Alex Blackwell.

As well as being named Employer of the Year, ANZ was also acknowledged for its work in inclusion of transgender people and ANZ’s Pride Network Specialist Dave Beks was recognised with the award for Out Role Model.

This year’s awards featured the new category of Platinum Employer, which recognises organisations that have ranked within the top ten for a minimum of four years within the last five year period, or have been acknowledged as Employer of the Year twice within that time frame. The inaugural awardees of Platinum Employer status are Goldman Sachs, PricewaterhouseCoopers, The University of Western Australia and Accenture.

Ten other organisations were awarded Silver Employer status and a further 34 were recognised with Bronze Employer Status.

EnergyAustralia picked up the achievement award for most improved employer and the Commonwealth Bank’s Unity network was named LGBTI Employee Network of the Year.

A record number of CEOs and C-Suite leaders attended this year’s awards luncheon, including Deloitte CEO Cindy Hook, who was recognised at CEO of the Year for her role in LGBTI inclusion.

Presenting at the ceremony, Pride in Diversity Patron Michael Kirby said: “The ever growing success of the outreach to the business, sporting and general community is most heartening. It is part of the explanation for the changing attitudes of Australians of all walks of life towards LGBTIQ equality and justice. In cities, regional, remote and rural Australia, things are changing.”

The AWEI saw 116 employers across Australia participate this year – a 38% increase compared to 2016. The employee survey attached to the index received 16,759 responses. By participating in the AWEI and the employee survey, employers are able to benchmark their practice against other organisations and obtain annual data on the impact initiatives are having on their employees.

Director of ACON’s Pride Inclusion Programs Dawn Hough said: “The AWEI has seen remarkable growth over the first seven years of its life with this year seeing the most significant growth to date.”

While there is still a long way to go, Hough said that LGBTI inclusion has well and truly made its way onto the Australian workplace diversity and inclusion agenda, and is starting to make a mark in the sporting field as well.

AFL’s Inclusion and Social Policy General Manager Tanya Hosch said: “The AFL is honoured to be recognised as a leader for LGBTI inclusion in sport. The AFL was delighted to contribute to the implementation of the PSI. The AFL found the benchmarking exercise extremely valuable as a means to review and reflect on its LGBTI inclusion policies and practices across the Australian Football industry.”

The Inclusive Club award was given to St Kilda Football Club and the Water Polo Pride Cup was recognised with the Inclusive Sports Initiative award.
David Pocock, Vice-Captain of ACT Super Rugby club The Brumbies, was acknowledged with the award for LGBTI Ally.

“It’s a real honour to win the inaugural Pride in Sport Champion Ally Award,” Mr Pocock said. “I believe that sport is at its best when it is challenging society to be more inclusive and there have been so many people involved in driving this change.

“In rugby, may I make special mention of [Pride in Sport Index Co-founder] Andrew Purchas, who has been challenging the sport to become more accepting and inclusive, and all the people who have shown leadership in this area. The support from the major sports of the Pride in Sport Index is a good example of this change. I also want to congratulate all the other winners, including the inaugural Pride in Sport Index Organisation of the Year, AFL,” Mr Pocock said.

“80% of the thousands of gay and straight respondents in the Out on the Fields study say they have witnessed or experienced homophobia in sport. Although the change has started, it is clear there is a long way to go to achieve LGBTI inclusivity in all aspects of Australian life. It was Magda who made all the difference to me, by being completely authentic and visible. Her visibility inspired me to do the same. To be unapologetically myself in public life in order to show all LGBTI people that they not only belong but they and can also reach the pinnacle of their chosen field without having to hide who they are. The world is brimming with diversity ready for us all to capitalise on. Let’s ensure that as sports and businesses we continue to keep the pool as large as possible from which our next generation of world champions, fans and customers will emerge from.”

AFL (2017 Pride in Sport Index Organisation of the Year)
“The AFL is honoured to be recognised as a leader for LGBTI inclusion in sport. The AFL was delighted to contribute to the implementation of the Pride in Sport Index. The AFL found the benchmarking exercise extremely valuable as a means to review and reflect on its LGBTI inclusion policies and practices across the Australian Football industry.
“In particular the AFL commends the significant efforts of the St Kilda Football Club for its work to implement the inaugural Pride Game played in Round 21 of the 2016 Toyota AFL Premiership Season. The AFL was particularly proud to endorse the St Kilda Football Club’s nomination for the ‘2016 Pride in Sport Inclusion Champion – Club Award’. The Pride Game was a key initiative fulfilled to reinforce the Australian Football industry’s commitment to ensuring the LGBTI community feels welcome and safe as part of the AFL community.” – Tanya Hosch, GM – Inclusion and Social Policy, Australian Football League

“Water Polo Australia is delighted to be part of inaugural Pride in Sport Index and we congratulate the winner and all of the other sports who have also participated this year and demonstrated their support for diversity and inclusion in sport. We are proud of the partnership we have with Pride in Sport, our four LGBTI friendly clubs in Sydney, Melbourne, Brisbane and Perth and our Pride Cup event, held annually during our National Water Polo League competition. There is still much work ahead toward ending homophobia, biphobia, transphobia and discrimination is sport, but together we can change that.” – Christian Renford, CEO, Water Polo Australia

“LGBTI inclusion is central to ARU’s goal to diversify rugby so our participants reflect the community in which we live. Pride in Sport is a key community partner for Australian Rugby and their expertise and advice has been invaluable to us as we progress together to ensure that the rugby community is one where all people can feel safe, accepted, included and valued.” – Bill Pulver, CEO, Australian Rugby Union,

“As a Foundation Member, FFA would like to congratulate Pride in Sport on establishing the Pride in Sport Index. FFA is committed to taking a leadership role to ensure that football is an inclusive and welcoming environment for everyone. Participation in the Index gives FFA the opportunity to review our progress against this commitment and be part of a network of sports committed to making a positive impact for LGBTI inclusion.” – David Gallop, CEO, Football Federation Australia

“As Australia’s leading sporting agency, the ASC believes sport should promote fairness, equity and integrity in sporting behaviour. Sport should be a place where people feel welcome and safe and where they are treated with respect and dignity.” Kate Palmer, CEO, Australian Sports Commission

“Sport plays a vital role in bringing us together as a community. We can take pride in the leadership demonstrated by those sporting codes who support their LGBTI players, staff, and supporters. I hope that their example inspires others to commit to making sport non-discriminatory and inclusive of our whole community.” Kate Jenkins, Sex Discrimination Commissioner, Australian Human Rights Commission

“Huge congratulations to all sporting organisations who participated and to those individuals, clubs and organisation recognised in the inaugural Pride in Sport Index. We look forward to Australian sport being the world leader in creating a welcoming environment for players, officials, coaches and fans for all, regardless of sexual orientation or gender identity.” Andrew Purchas OAM, Pride in Sport Index Co-founder