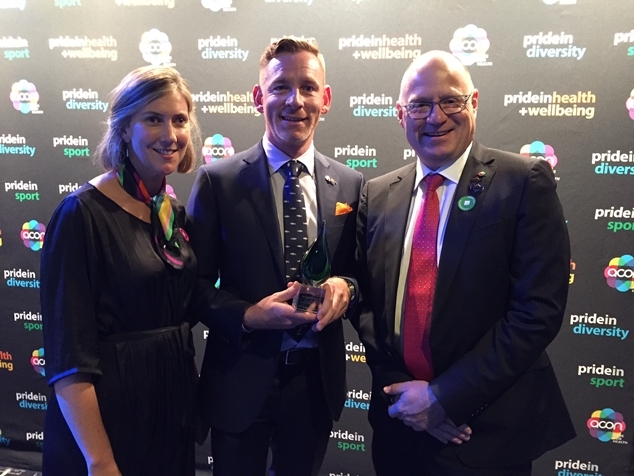 ANZ has been awarded 2017 Employer of the Year at the Australian LGBTI Inclusion Awards, a special event held in Sydney by the AIDS Council of New South Wales’ (ACON) national not-for-profit program, Pride in Diversity.

The top award takes prime position on an annual list of Australia’s best employers as assessed by the Australian Workplace Equality Index (AWEI) which measures and evaluated LGBTI inclusivity in the workplace.

Speaking at the ceremony, patron and former High Court Justice Michael Kirby said the growing success of outreach to the business, sporting and general community is heartening.

“It is part of the explanation for the changing attitudes of Australians of all walks of life towards LGBTIQ equality and justice,” Kirby said.

“In cities, regional, remote and rural Australia, things are changing.”

116 employers took party in the AWEI assessment this year, a 38% increase in participation as compared to last year.

“ACON congratulates all award winners recognised today on their significant achievement and for showing great leadership in the area of diversity and inclusion,” Hough said.

The University of Western Australia was one of only four employers who were awarded Platinum Employer status, which recognises organisations that have ranked within the top ten for a minimum of four years within the last five year period, or have been acknowledged as Employer of the Year twice within that time frame. UWA was joined by Accenture, Goldman Sachs and PwC.

“The University has demonstrated a significant commitment towards LGBTIQA+ inclusivity for more than a decade and will continue to do so,” UWA’s Deputy Vice-Chancellor Professor Kent Anderson said.

“People should be free to go to work, complete their studies and be a part of the community in a supportive positive, fair and inclusive environment.

“UWA aspires to be included among the world’s top 50 universities by 2050 and a demonstrable commitment to diversity and inclusion is critical to that.”

Bankwest were among the nine employers who were awarded Gold status, for ranking in the top 10 during the previous year. EY, Macquarie Bank, Commonwealth Bank, The Australian Federal Police and the Australian Taxation Office shared the title.

Bankwest Managing Director Rowan Munchenberg was at the Sydney ceremony and said he was very proud of Bankwest’s achievement of gold status.

“The establishment of a culture that embraces diversity ultimately helps us support and address the diverse needs and expectations of our customers,” he said.

“I’ve only been at Bankwest for a relatively short period of time but I’ve seen again and again how much colleagues are valued in the open and inclusive working environment which we encourage,” he said.

“I’m proud of the ongoing work in this important space with the aim of ensuring Bankwest is an LGBTI employer of choice.”