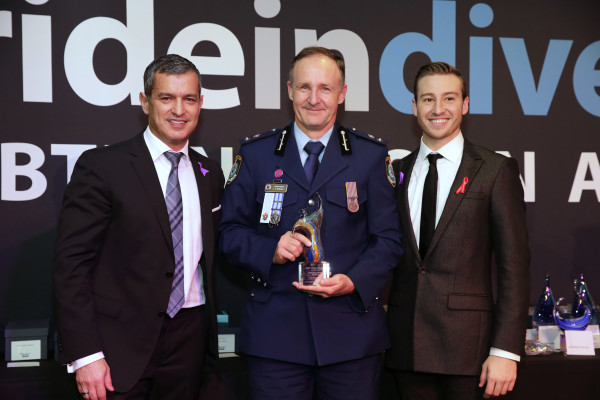 HEADS turned in surprise at the Pride in Diversity (PID) awards on May 20 in Sydney as New South Wales Police picked up a swag of awards.

ACON’s PID program is a national not-for-profit employer program for the inclusion of LGBTI people in the workplace.

Despite having been a member of PID since 2012, it was the first time NSW Police entered the Australian Workplace Equality Index (AWEI), which is a benchmarking instrument that evaluates LGBTI inclusivity against a comprehensive set of measures in addition to a body of supporting evidence submitted by the employer as part of the evaluation process.

NSW Police came in 11th place overall on the index and also picked up awards for the inclusion of transgender people in the Transgender Inclusion Award category. Superintendent Tony Crandell was also recognised for his achievements in LGBTI workplace inclusion winning an Executive Leadership Award.

“I’ve been a police officer for 30 years and I’ve seen a massive change in LGBTI inclusion,” Supt Crandell said.

“I especially don’t want to say we haven’t got any further to go, because we have, but for police officers being able to be themselves, it’s been night and day in the journey I’ve seen.

Supt Crandell said much of NSW Police’s LGBTI inclusion achievements came via its GLLO (gay and lesbian liaison officers) program which was established in 1990.

“From my perspective the GLLO program is just so important and for the GLLOs to be identifiable to not only make officers know they can have someone they can trust, but for the LGBTI public to know the officers can identify with them,” he said.

“A lot of our work is through the GLLO program, we have over 200 GLLOs. They are the face of the police to not only the community, but to the force itself.

“They provide support and advice to LGBTI or sexuality and gender diverse police officers. They do lots of community engagement.”

The police also have a strong presence during the Wear It Purple Day and are planning to start a memorial for Transgender Remembrance Day.

NSW Police participates in Mardi Gras, uses inclusive language in its policies and runs training sessions for new recruits at the police academy.

“For me that is such a massive team effort, Jackie is really the centre of all things LGBTI in the workforce,” he said.

Braw said one of her proudest achievements in NSW Police LGBTI inclusion plan was the 25th anniversary of the GLLO project an events last year.

“I was totally floored when we got 11th… it was a surprise,” she said.

“Pride in Diversity would like to congratulate the NSW Police Force on achieving 11th place within the Australian Workplace Equality Index (AWEI) 2017,” she said.