Home»Awards»BREAKING DOWN BARRIERS FOR LGBTI INCLUSION 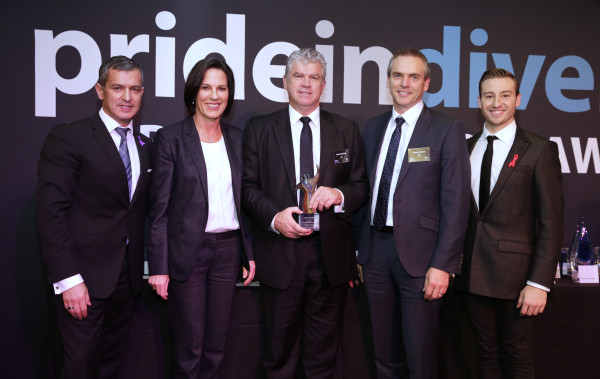 BREAKING DOWN BARRIERS FOR LGBTI INCLUSION

“I was a bit surprised to be honest, but very proud to have won the award. I think it’s a reflection of our AGL Shine program and the great efforts by the team coordinating it that has helped our Loy Yang workforce become more aware and embrace it. I’m just one player, it’s the workforce more broadly that has allowed it to happen,” Mr Rieniets said.
Recognised for his outstanding efforts in building LGBTI inclusion across his local community and AGL more broadly, Mr Rieniets has been crucial in helping break down barriers and to the overall success ofAGL Shine.
An employee-driven network, AGL Shine was established in response to an increasing number of AGL employees seeking to achieve a more diverse and inclusive workplace culture where LGBTI employees feel they are able to be truly authentic and bring their whole self to work, and to feel safe and supported to do so.

Acknowledged as a thought leadership initiative and influential entity within the company, AGL Shine is represented by almost 200 members and allies from across the company, including regional and remote locations.

In 2015 Mr Rieniets joined AGL Shine as an ambassador and in that time he has organised and led a number of training sessions which have focused on inclusive language and behaviours, communications and engagement.

“It wasn’t until we ran some sessions on site that I became more aware of some of the issues facing LGBTI employees. Hearing first hand from guest speakers, such as Member for Eastern Victoria, Harriet Shing, talk about LGBTI in the workforce was enlightening. These sessions were very well attended and I really enjoyed educating the workplace, and myself, more broadly on issues they may not have even considered. Education across the workplace has been a key feature for me, and I hope that over the next year we can increase the awareness even more across the predominant blue collar work areas and right down to the coalface,” Mr Rieniets said.

The progress and impact of AGL Shine has encouraged AGL to publicly take a strong stance on matters that concern the LGBTI community. This year AGL pledged support for marriage equality in Australia by becoming a corporate sponsor of a national campaign and Mr Rieniets represented regional AGL workplaces when he marched in Melbourne’s Midsumma Festival.

“As a leader, I think it’s important to show your support in an active way – lead from the front and show you care about everyone, no matter who or what they are,” he said.

“I believe everyone should be treated equally. That’s first and foremost for me. I lead a large power station and a coal mine on the premise that everyone is equal, and should feel safe and valued while at work. It’s also about trying to increase awareness and change people’s attitudes that don’t belong in today’s modern workforce. People need to be treated equally, they need to feel accepted, connected, and that they belong. I think a diverse workplace is good for business. People are more productive, there’s less conflict, and this leads to better business outcomes.”

“Both awards are a significant achievement which reflects AGL’s commitment to LGBTI inclusion, not only within their workplace but also within the wider Australian community,” Ms Hough said.