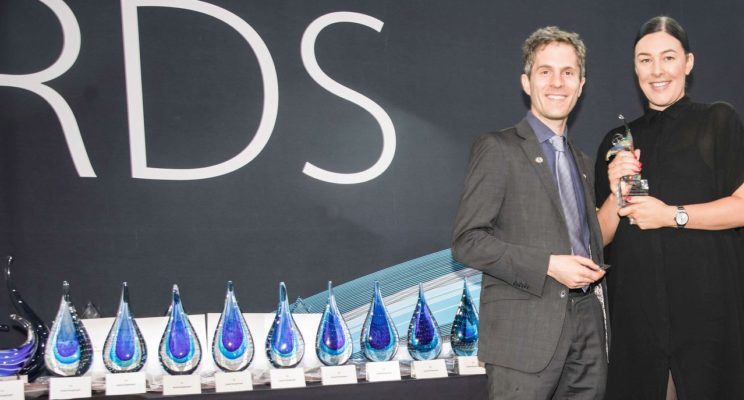 The Sapphire inspire Award celebrates the achievements of an LGBTIQ+ Woman, from their impact on workplace inclusion and support of other out women, to contributions they’ve made to promote and encourage such visibility. It is an individual award nomination that is part of the annual Australian Workplace Equality Index (AWEI) and announced at The Australian LGBTI Inclusion Awards.

With some outstanding achievements from several women nominated for this year’s award, the 2019 winner is Caitlin Monnery–Korving from ANZ. The award was announced by Pride in Diversity Relationship Managers Sarah Cox and Nicki Elkin, who govern the Sapphire Initiative.

Caitlin impressed the judges with the inspiring number of activities she delivered throughout 2018. In particular, she was instrumental in the development and creation of Women in Pride, a network for LGBTIQ+ women and allies within ANZ, and co-creator of Rainbow Women, an external network in Melbourne. Caitlin also drove ANZ’s early endorsement of the Darlington Statement for Intersex People.

The name of the award stems from Pride in Diversity’s Sapphire Initiative, developed to generate greater awareness of the unique challenges faced by Lesbian, Gay, Bisexual, Transgender and Intersex (LGBTIQ+) women in the workplace. The Sapphire initiative seeks to provide women with an opportunity to openly express and discuss some of these challenges in a safe, non-confrontational professional environment.

The initiative seeks to engage LGBTIQ+ women (regardless of whether or not they are out at work) who feel passionate about wanting to see a more inclusive workplace, one in which LGBTIQ+ women can freely be themselves at work and one in which there is a greater visibility of  ‘out’ female role models.

The dual impacts of being an out LGBTIQ+ female role model in the workplace is often referred to as the double-glass ceiling. Caitlin’s work in this area has certainly had a major impact, progressing towards equality, inclusion and visibility of LGBTIQ+ women in the workplace.

Click here to learn more about the Sapphire Inititative or become a member.

This year, ANZ was also recognised as a Platinum Employer of the AWEI, having achieved Gold Employer Status for the past four years. In recent years, ANZ has previously been recipients of:

ANZ is a Pride in Diversity member.